Home » 5G theme related job postings up by 65% in July

5G theme related job postings up by 65% in July

The leading data and analytics company also found that active jobs were up by 46%, whereas job closures rose by 75% in the same period. This indicates an increase in the demand for expertise in the 5G domain.

According to GlobalData’s Company Filings Analytics database, major players such as Ericsson, China Telecom, Deutsche Telekom, and American Tower were discussing investment around CapEx and 5G production in 2022. 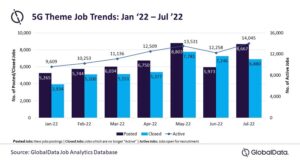 Sherla Sriprada Business Fundamentals Analyst at GlobalData said, “In its Q1 2022 report, Ericsson discussed investing SEK 1.1 billion in CapEx and other investing activities including 5G production capacity. Deutsche Telekom mentioned that its cash CapEx (before spectrum investment) increased by EUR 0.4 billion to EUR 4.7 billion, mainly because of the ongoing build-out of its 5G network in the US operating segment where the cash CapEx increased by EUR 0.4 billion to EUR 3.0 billion.”

In 2021, American Tower saw the early stages of transformational 5G network upgrades in multiple markets, including nearly $105 billion spent by US carriers for critical mid-band spectrum and over $65 billion in CapEx deployed by carriers into network investments across global footprint.

Sriprada added, “Several tech companies are looking to hire engineers for developing 5G use cases. For jobs such as network administration, testing and software development the firms are likely to hire experts in areas such as infrastructure development, equipment, network operations, and spectrum services.”

Vodafone Idea’s posting for an ‘AGM – Practice Lead – Smart Mobility’ will be required to have experience in the smart mobility vertical and 5G connected cars, electric vehicles.

Reliance Jio is hiring for a ‘Lead 5G Core & Cloud Architecture’ to support diverse use cases and core products for 5G.

Sriprada said, “India’s 5G spectrum auction ended on 1 August 2022, with Reliance Jio emerging as the top bidder along with Bharti Airtel, Vodafone Idea, and Adani Group. Bharti Airtel is planning to launch 5G services in India before the end of August.”

Apple has also advertised roles in the 5G protocols layer and is hiring for a ‘RF Systems Architect’, which looks at defining and researching emerging 6G spectrum policy, use cases, and trends for radio access networks in advance for 6G radios.

Nokia has also opened a 5G Industrial Incubation Lab in South Australia and posted a ‘Graduate Engineer in Technology’ role.

Ericsson’s Application Development Platform (ADP) is a new department dedicated to microservice development with the purpose of enabling 5G. One of the roles posted was a ‘Software Developer for ADP 5G’, which looks at developing the microservice container environment including adapting to common requirements from Ericsson as well as developing new features.

Sriprada added, “It’s not only 5G investments that companies are looking at as they have also shown an interest in 6G investments and related roles. Over 130 jobs were posted between January 2022 to July 2022 based on 6G as a title search. This is evident when looking at Nokia Corp’s advertised role for a ‘Senior 6G Sustainability Architect’ and Ericsson’s ‘RF Research Engineer 6G Antennas’ posting.”

More than half of US companies expect to recruit for...

Global interest in Crypto jobs is down 62% since the...

Tech industry laying off staff at the same rate as...