The technology industry is experiencing difficult moments as the COVID-19 pandemic hit global economies hard. The iPhone maker is no exception, as Apple’s gross margin has taken a hit in recently.

According to TradingPlatforms.com, Apple’s gross margin declined to 35.9% in the third quarter of 2022. This marks a significant drop from the company’s 43.8% gross margin in the previous quarter.

Speaking on the data, TradingPlatform’s specialist, Edith Reads, said, “Apple suffered supply bottlenecks and shutdowns in China. Yet, sales of iPhones continued to increase. Thus, demonstrating that the company is robust despite economic headwinds.”

She added, “The gross margin decline is the biggest since 2020.”

Meanwhile, the Mac computer, Apple’s other flagship product, struggled in the marketplace. Apple’s Mac sales for the fiscal quarter came in at $7.38 billion, below the $8.70 billion forecast. This number indicates a significant drop of 10% YoY for the entire product family.

Apple’s gross margin of 43.26% beat the company’s projection three months ago, which had been between 42% and 43%. Besides, the firm announced that it had allocated $28 billion to share repurchases and dividends during the quarter.

Apple’s iPhone on the rescue

Clients are struggling with fears of recession and rising inflation worldwide. The anxiety has decreased demand for cell phones, computers, and other pieces of technological goods.

Apple may undergo a prolonged phase of sluggish growth or maybe no growth at all.

However, for the time being, Apple’s iPhone is still managing to bring in more revenue.

During the third quarter, Apple’s iPhone business brought in a total of $40.67 billion, a 3% increase from the previous year. According to the business, demand for all varieties of the iPhone 13 remained robust.

As a general rule, Apple unveils its newest iPhone models in September, which typically results in a decline in sales as buyers wait for an upgrade. 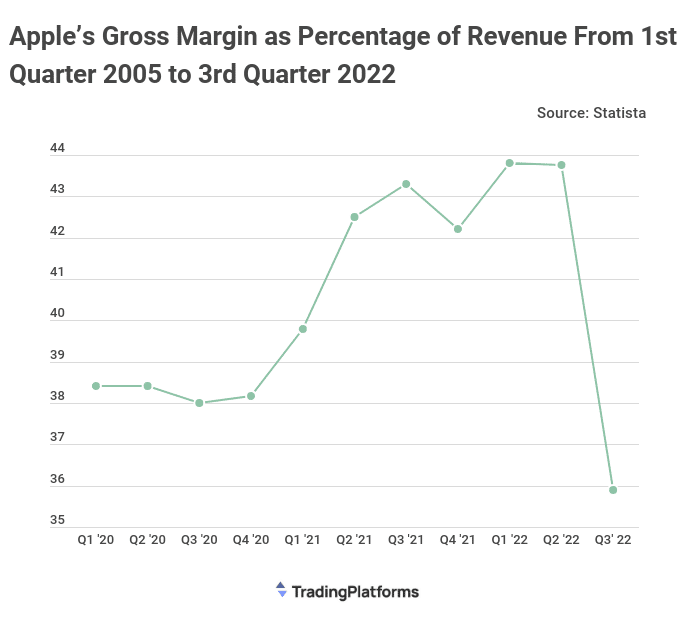 What Is in Store

Apple stock gained more than 3% after it announced its quarterly returns. Even though the firm did not issue formal guidance for the next quarter, experts have set their sights on specific numbers.

Apple’s current earnings per share expectation for the fourth quarter is $1.31, with revenues expected to come in at around $90 billion.

Furthermore, Apple CEO Tim Cook elaborated on how Apple is coping with inflationary pressure in the face of rising interest rates. He indicated that Apple would continue spending money even though many other firms are cutting costs to be profitable.

CMA plans investigation into Apple and Google’s ‘effective duopoly’ on...

Amazon and Apple disappoint the markets