A StockApps data presentation indicates that Bitcoin’s total hash rate is down by -1.7% in the second quarter of 2022. There have only been a few other occasions in its history when the hash rate has dropped significantly.

StockApp’s Edith Reads commented on the data. She said, “The network is still functioning normally along every block, but the mean hash rate has taken a significant knock. The reason for the significant hash drop is the drop in Bitcoin price which makes older equipment unprofitable on the margin.”

Edith adds that the impact of the recent heatwave in the United States and the curtailment, particularly in Texas, is in play too. As summer energy demand and costs grow, industry-scale miners may shut down hash rate per power agreements.

From an all-time high, the hash rate drops

This is the third consecutive downgrade in difficult adjustment and the fourth time in the last ten weeks that the hash rate has dropped. It is good news for miners who can stay online and make money. The hash price has returned 48% of its lows since the adjustment and the subsequent price surge.

The marginal costs of producing Bitcoin for some of the larger public Bitcoin miners are estimated to be between $6,000 and $10,000. The majority of those expenditures are going toward the cost of power. Because they use some of the most cutting-edge, latest-generation hardware, the whole network will incur a much higher production cost.

Charles Edwards created an estimate for the overall network electricity cost for Bitcoin mining which is currently hovering around $16,000. Throughout its development, bitcoin has only been possible to achieve a lower price than this rising estimate of the cost of its mining electricity. 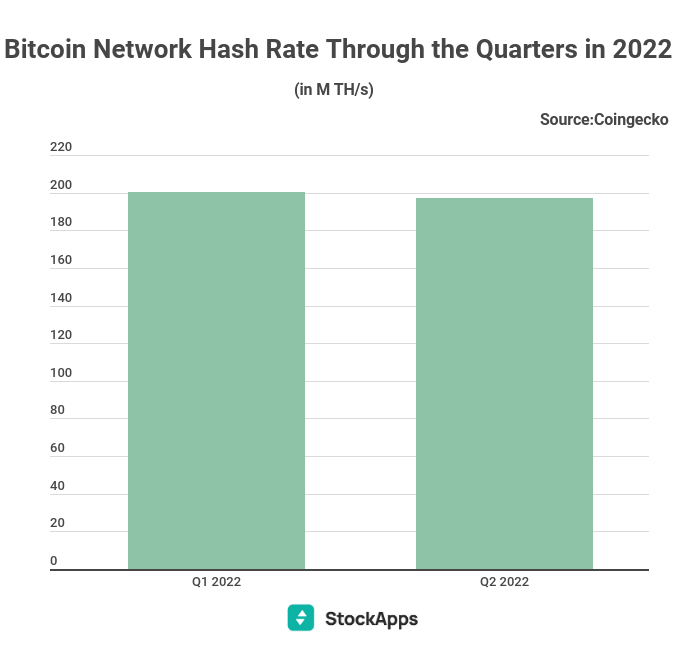 In the second half of the second quarter, Bitcoin’s overall hash rate grew more irregular and variable. This behavior indicates miners are struggling to adapt to the changing market conditions.

Further, Bitcoin’s falling price decreased miners’ profitability, leading to some operations closing. Miners with excess capacity can take advantage of decreased competition to seize a larger portion of the total hash rate. This, in turn, drives the hash rate back up again, and the cycle continues.

Reports indicate that miners are also selling more of their Bitcoin holdings. This action adds to the downward pressure on the currency’s price. Nevertheless, the global hash rate is still moving upward (at least for the time being), even reaching a new ATH on June 8.