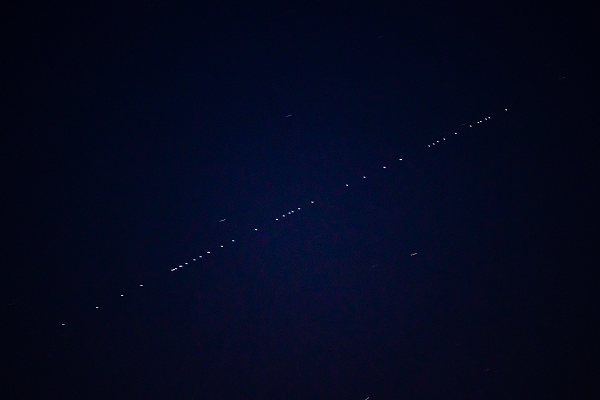 It’s not just billionaires Elon Musk, Sir Richard Branson and Jeff Bezos who are heading for space — more than one million UK households are already using satellite broadband, according to research from Uswitch.com, the comparison and switching service.

However, despite the appeal of the new type of connection, set-up costs of about £500 are deterring two thirds of consumers from trying the technology.

Satellite broadband can offer a more reliable service for people in areas that are poorly served by traditional connections, for example those in rural areas. Data is beamed from a satellite to a dish on the property, so the technology doesn’t rely on cables being laid to the home.

Set-up fees can be expensive due to the need to install a satellite dish, but users say they pay £29.70 a month on average for the service, compared to an average £33.60 for all broadband users.

Almost one million rural households say satellite broadband could be a lifeline due to their unreliable or slow existing connections. Almost 200,000 UK homes are currently struggling with speeds lower than 10Mbps — the level that Ofcom considers a decent service.

Coverage from satellite broadband is set to become universal, but only a quarter of households (27%) believe it is available in their area.

Tesla billionaire Elon Musk began a UK trial of his Starlink satellite broadband system in January and hopes it will have 500,000 users worldwide within a year, while BT has joined forces with operator OneWeb to provide connections to people in remote areas. Other existing UK satellite broadband providers include Broadband Everywhere, Freedomsat, KONNECT and Satellite Internet.

Despite the growth of the technology, only two fifths of consumers (41%) are aware of satellite broadband, and only one in seven consumers (14%) have considered trying it out. Part of the problem may be a lack of brand recognition, with three quarters of UK consumers not having heard of any satellite broadband providers. Starlink is the best known, recognised by one in ten people.

More than half of satellite broadband users (53%) say it offers a better alternative than traditional connections, with two fifths (41%) saying it is faster than the alternatives, and three in ten (31%) believing it to be cheaper.

Uswitch advises rural residents to use a speed checker to see whether their Wi-Fi is delivering the speed it should, and offers tips on alternatives to traditional providers. For more information, see Uswitch’s guide to satellite broadband.

Ernest Doku, broadband expert at Uswitch.com, comments: “Satellite broadband is being thrust into the limelight by entrepreneurs like Elon Musk, and it’s amazing to think that more than one million UK households are already getting their internet this way.

“The technology is improving all the time, and with big players like Starlink entering the UK market, connections are only going to get faster and more reliable.

“Satellite broadband offers hope to residents in rural areas who have struggled to get a decent connection from traditional providers, and we’ll be watching to see how BT’s partner with OneWeb grows over the coming years.

“While it’s tempting to think that one technology can solve the problem of the digital divide, there is no single solution to rural broadband.

“Many households are still on ADSL connections and enduring slow speeds unnecessarily, unaware that in many cases they could upgrade to fibre broadband and still save themselves money.

“Anyone who is still battling with slow broadband should run a speed test to find out how reliable the connection really is. If you’re not happy with the results, run a comparison online and see if you can get both a better deal and a faster service.”

Lockdown broadband deals are ending, costing consumers up to £354...

Millions of UK premises have access to fibre broadband but...

Renault Group, a top automotive player and pioneer in the European EV market, and …

Chip’s growth round opens to the public with...