The energy consumption of Bitcoin (BTC) mining has been a hot topic lately. It’s one of the primary reasons BTC faces vociferous opposition from certain quarters.

Studies indicate that mining 1 BTC consumes about 596 thousand kWh of power, making it a huge contributor of greenhouse gas emissions.

But how do emissions from BTC mining stack against those of one of the earth’s precious commodities, Gold? StockApps reckons that the carbon footprint of verifying a BTC transaction is 22 times larger than that of mining Gold of an equivalent value. Its analysis shows that mining one BTC produces 332 tons of Carbon dioxide while mining Gold of similar worth emits 15 tons of CO2.

“It takes 596,000 kWh to verify a single BTC transaction compared to the 25,000 kWh it does to mine Gold of the same value,” holds StockApps’ Edith Reads. She adds, “ This directly affects the emissions resulting from both processes. This is significant as it suggests BTC does more damage to the environment per unit than Gold.”

BTC is no stranger to criticism

This news isn’t surprising as Bitcoin has attracted criticism for its excessive energy consumption for years. Estimates show it consumes as much power as Thailand (191 TWh). That consumption level gives BTC a Carbon Footprint of nearly 107 metric tonnes, comparable to the Czech Republic’s.

Bitcoin mining is a zero-sum game where miners compete for rewards. It relies on a Proof-of-Work consensus requiring miners to spend enormous resources to produce a tiny amount of coins for a profit. The more coins they produce per day, the higher their reward will be. But that also translates into more waste production owing to increased power consumption. 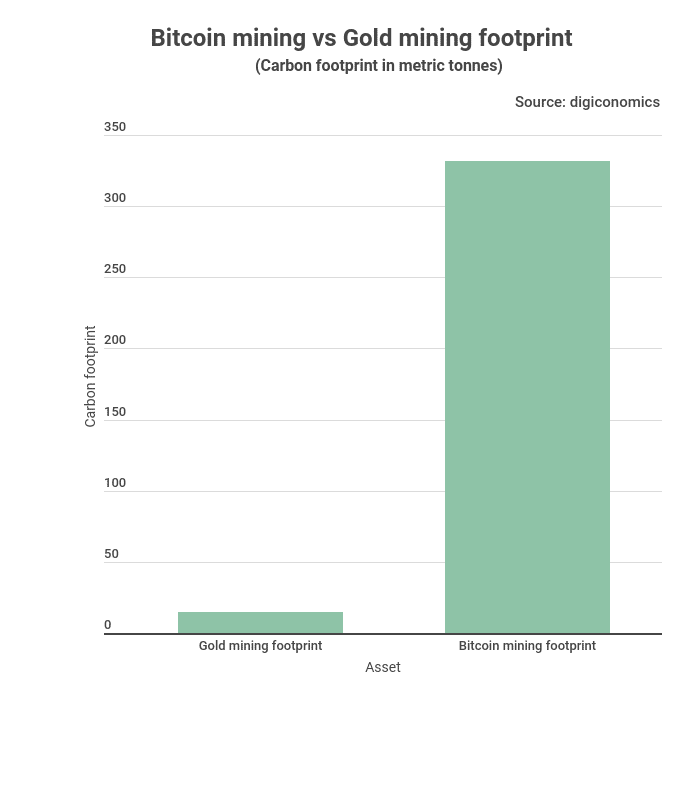 To compound matters, the coin’s computational power requirements have been increasing fast. This increase helps maintain the king crypto’s scarcity and hence value. However, it comes with exponential growth in power requirements leading to further strains on the environment.

While the environmental costs may be substantial, one school of thought argues that investing in BTC is not about its impact on the environment. Rather, it’s about BTC’s significance as a store of value and medium of exchange. That said, there’s unanimous agreement that BTC mining should adopt more environmentally sound means.

One proposal that’s come up in conversations surrounding BTC sustainability is the use of alternative fuels. A significant portion of the coin’s mining uses fossil fuels that are detrimental to the environment. As a result, stakeholders are now pushing for adopting renewables like geothermal, solar, wind, and hydropower.

A more radical approach has been the suggestion to transition BTC mining to an environmentally conscious consensus mechanism. One of these is the Proof-of-Stake Consensus which is less energy and hardware intense. Already Ethereum BTC’s closest challenger is in the process of migrating from PoW to the PoS consensus. That move will see it cut its energy requirements by99%.