The Balthazar NFT Marketplace Update analyzed sales volume from four of the top NFT marketplaces for the month of August 2022 (by all-time trade volume) – OpenSea, Magic Eden, LooksRare and Solanart.

The NFT market saw a continued downward trend in sales volume for the four marketplaces combined, falling by 22.26 percent to US$526.09 million in August 2022 compared to July 2022 (US$676.73 million). This is far from the January 2022 record of over US$7 billion in sales volume.

Read more on Cryptocurrencies and investments:

Crypto traders are showing renewed confidence, with many looking for a piece of the volatile market

Near Protocol has a market cap of more than $3.2bn making it the 26th biggest cryptocurrency in the world 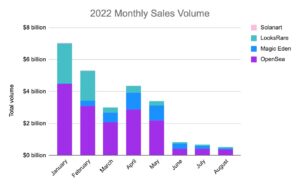 John Stefanidis, Co-founder and CEO of Balthazar, said he expected the market slowdown to follow other economic trends but is confident that the NFT market will strengthen.

“Macroeconomic conditions are putting pressure on the NFT market, much like the drop in tech stocks, discretionary spending, luxury goods, and the wider crypto market.

“There will be fewer sustainable NFT projects but these will hold their value. There is also a need for projects to settle into a high quality and sustainable utility.

“It’s similar to the early days of crypto when a lot of ICO businesses crashed, however, some were successful because they had great business plans, strong communities and they were solving real problems.

“Our thesis is that when the broader utility and applications of NFTs improve, such as in the form of contracts, deeds and gaming, that’s when we will start to see NFT sales volumes rise.The real value of an NFT is in its ability to provide digital ownership.”

While OpenSea and Magic Eden saw declines in sales volume in August compared to July, LooksRare and Solanart experienced a rise.

The number of trades however, has experienced an increasing trend since January, even though there was a 6.82 percent decline in August (14.94 million) compared to July (16.03 million). July saw the highest recorded number of trades this year, while the year started off with 3.78 million trades in January.

The past few months have significantly impacted the projected sales volume for 2022, after starting the year much stronger. As a result, the sales volume projection for 2022 across three* of the marketplaces combined is expected to reach US$37 billion – 159 percent higher than 2021 (US$14.29 billion).

*LooksRare was excluded from the projection calculation due to unavailability of 2021 data.