The Russian state news agency website TASS appears to have been hacked and has been taken down.

Earlier on Monday the Tass.com site was hacked with an anti-war message which read, “We urge you to stop this madness, do not send your sons and husbands to certain death.

“Putin is forcing us to lie and is putting us in danger…It’s not our war, let’s stop him!”

Now an error message appears when trying to access the site. 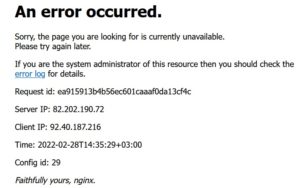 It is not known currently if Tass have taken their own website down due to the message or if the hacking group Anonymous is involved.

Over the weekend Anonymous has successfully waged a cyber war against the Vladimir Putin the government and the Kremlin’s websites.

Anonymous released a video on Sunday morning warning the Russian President that if he continues he will “face unprecedented cyberattacks from all corners of the world.”

In the video the hacking group warned, “Members of Anonymous have declared cyber war against your aggressive regime.

“With numerous government websites being taken offline in the past several days. A few downed websites is only the beginning though.

“Soon you will feel the full wrath of the world’s hackers, many of whom will likely reside from your home country.

Your secrets may no longer be safe, and there is a chance that key components of your government’s infrastructure could be hijacked.