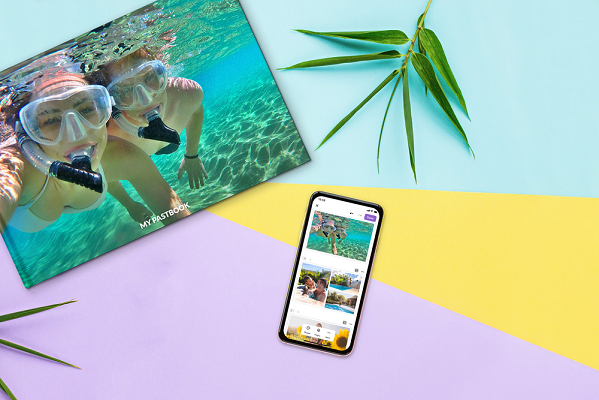 PastBook who are a global platform for one-click photo products, have announced the launch of its iOS app.

The industry first technology allows consumers to create a photo book in less than 60 seconds by simply selecting a time range or location, the artificial intelligence does the rest. Since its inception, the firm has grown exponentially, tripling its revenue year on year from 2019 to 2020. Today’s iPhone app launch aims to save its users hundreds of hours in photo organisation and is now available in the Apple App store.

Using cutting-edge technology to turn users’ best memories into photo books, the industry first advancement removes the tiresome task of photo selection away from the customer. By selecting a date range, location or album from smartphone camera rolls, the app – in under 60 seconds – analyses the image quality and context, and removes duplicates/similar photos. Once the artificial intelligence has picked the best photos for the final book, it smart-groups them into curated page layouts and presents a preview that is easy to view and edit, syncing with a network of printers internationally for the final published product.

As one of Europe’s fastest growing companies, Pastbook’s trajectory of scale has seen successful growth across North America – its largest market – Australia, Europe and the UK. Throughout its expansion, the company has kept technological innovation at the core of its proposition.

In 2020, Stefano Cutello – founder and previous CEO – made several changes to the leadership team following the company’s rapid growth. Leading the charge of change, former CEO of Albelli and Vice President at Cimpress, Wouter Staatsen was appointed as CEO. Cutello was then able to take up his new role as Chief Product & Innovation Officer. As CPO, Cutello led the company’s product strategy and R&D, a directed focus on technological advancement that has enabled the latest launch of the industry-first, patent-pending application.

PastBook posted revenues of USD 14.3 million in 2019, with a projected tripling of this figure estimated for 2020. Testament to its rapid growth following the company’s restructure, PastBook has appeared in both the FT1000: Europe’s Fastest Growing Companies and Deloitte’s Technology Fast 500. The company also won the Deloitte Fast50 for the Media & Entertainment category, followed by CEO Wouter Staatsen and Stefano Cutello discussing the rise of the “experience economy” with Forbes in early June.

Wouter Staatsen, CEO of PastBook said of the launch, “The launch of this app will be a pivotal point in the development of PastBook as the global, fabless platform for one-click photo products. In the past year we have achieved tremendous growth in revenues internationally and the addition of this unique piece of IP will provide us with incredible potential for scale in the next few years. I’m proud to be a part of what is a brilliant and talented team and I’m hugely excited to lead PastBook trailblazing into new frontiers, transforming the online photo industry”

Stefano Cutello, founder of PastBook commented, “Today is a landmark day for both the company and for myself after developing the app for over a year and a half. Since Wouter took the role of CEO in 2020, I have had more time to focus on the product and innovation to take PastBook to the next level both in terms of our offering and international scalability and growth. In that sense it is hugely gratifying that the past 18 months have had the desired effect in allowing the product to advance significantly while maintaining the growth that has led us to be recognised by the Financial Times, Deloitte and Forbes. This app, and the technology behind it, has been in my mind since the very early days of PastBook, and I’m so proud to finally see it coming to life. I’m sure that it will provide people with a more effortless way to relive and enjoy their memories.”

Daniel Scheijen, CMO of PastBook added, “With more and more consumers using their phones as their primary camera, camera rolls turn into enormous piles of images. Our app will find the needles in the haystack and turn these memories into a curated photo book in seconds. Users that have tested our app have described it as magical. I guess that sums it up.”

Founded in 2012 in Amsterdam by Stefano Cutello, as part of RockStart Accelerator, PastBook has been named one of the ‘Hottest startups in Europe” by Wired, won the Deloitte Technology Fast 50 in the “Media & Entertainment“ category and secured a top 20 spot in the Financial Times Europe’s Fastest Growing Companies list.

PastBook is on a mission to make reliving memories frictionless. Allowing consumers to create beautiful photo products, in one-tap from pictures that are nowadays scattered between social networks and devices. Its Intelligent Instant Photo Book platform automatically and intelligently selects the best photos from the designated source, instantly arranging them into beautiful photo products, ranging from photo books, posters, photo tiles and calendars – printed and shipped worldwide across a global printing network.