Home » We are constantly being watched, and our data is being collected without our knowledge or consent

We are constantly being watched, and our data is being collected without our knowledge or consent

Being tracked by big tech companies has become the new normal. We are constantly being watched, and our data is being collected without our knowledge or consent. But which company is collecting the most data on us?

According to an analysis by StockApps.com, out of the five major digital firms (Google, Twitter, Apple, Amazon, and Facebook.) Google harvests the most data on its users. The corporation collects thirty-nine data points for each user.

Commenting on the analysis, StockApps.com Edith Reads said, “Most people do not have the time or patience to read privacy policies that can be several pages long for each website they visit. Also, it is quite unlikely that all users have a background in law to properly grasp the privacy policy.

“Besides, users lack time, patience, or energy to try to figure out what information websites are storing and how they are using it to their advantage.

Google takes the cake when it comes to tracking most of your data. This should not surprise, given that their entire business model relies on data.

Apple is in a league above Amazon in protecting user privacy. It is the most privacy-conscious firm out there. Apple only stores the information that is necessary to maintain users’ accounts. This is because their website is not as reliant on advertising revenue as are Google, Twitter, and Facebook.

Each of these data firms focuses on a particular category of data and not the quantity of data. Google collects more different types of information for individual users. The firm relies on this data for targeted advertising rather than relying on third-party trackers.

Digital firms are keen on harvesting as much data as possible. This demonstrates how pervasive tracking of users is on the internet at present. It also shows that a significant amount of work needs to be done before individuals can begin to feel safe while using the internet. 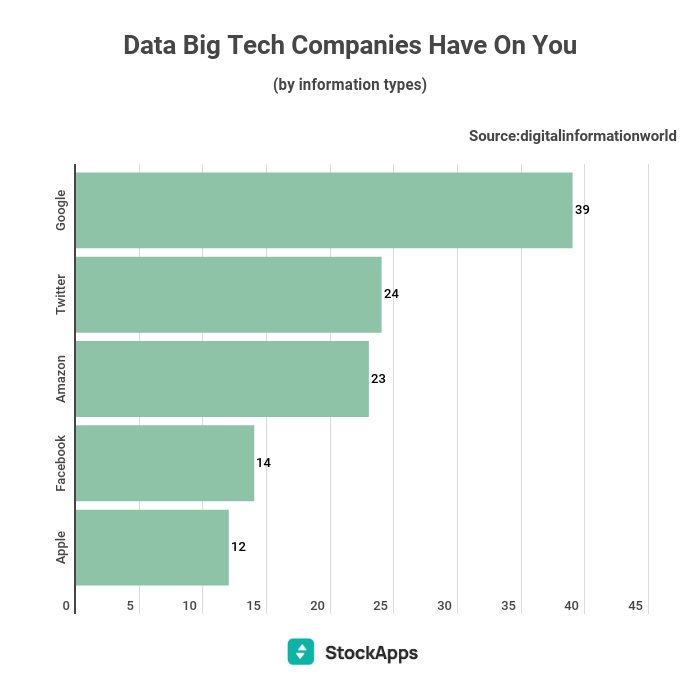 Besides users’ information, Google stores a significant amount of data on several domains. If it is data, there is a strong probability that Google is collecting it. This includes anything from users’ specific location to your browser history. Moreover, it stores user activity on third-party websites or apps and the emails on users’ Gmail accounts.

The fact that Google keeps users’ specific locations is a great concern. Due to its importance in tying consumers’ online and offline profiles, location data is a hotly debated topic in data privacy.

Some people have resolved to use DuckDuckGo as their primary search engine. This is because the search engine promises not to store any user data.